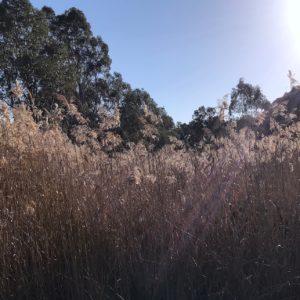 There were many moments over the last few months when I wished I’d been on time. On time to be somewhere, on time for a deadline or a project, on time to see someone or do something.

Then one moment gathered all those moments. When I needed it most, I was there. I was with him, and he knew it. Knew me. Not just in that final second, but in the weeks, months and nights that led to it. This moment had stitched itself through many others.

It still haunts me, that I might not have made it. That my dad might have died without me. Not alone, not unloved, but with everything for us still unresolved. I had one like that this year. It’s too harsh to ever describe.

So, right now, I guess that’s how I’m feeling. That all those smaller moments add up. There’ve been plenty of times in my life that I didn’t make it. Times when other loved ones have been alone. But this time, yeah, this one damn time. Time was with me. For once, it was on my side.

Time seems to have left me since then. It’s like the usual elasticity of time has worn out. It’s still elastic, but it’s so thin I don’t sense it the same way. I read clocks and understand that I’m late or early. But I’m adrift in a sea of seconds or maybe hours. I’m strangely happy this way.

You know what, though? Right now, in this long and lengthening moment, I’ll stand. His invisible hand in mine. Watching time and all its inhabitants rush by.

I love words, big and small. I'm a plain English writer and editor by day, and a fiction writer by night.