My love of words 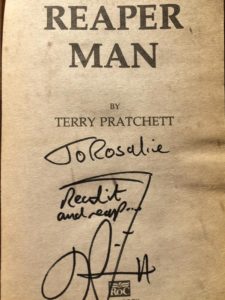 I remember the day I met Sir Terry Pratchett.

He wasn’t a sir then, but he was already popular. I live on the wrong side of the turtle, so I’d been reading him for many years before I had the chance to meet him in the flesh.

I can still see his face, the room, the books.

Terry had been signing those books all day. He was short-tempered because his hand hurt. He should have been furious. We ask so much of authors like him. Terry looked at me suspiciously when I told him my name. He wrote it down, but seemed certain I’d made it up in some way. I’d been in an accident the night before, so I can imagine how I looked. The staff of the bookshop had kindly given me a chair to sit on as I waited in the queue and I was sleepy from the painkillers. I remember the eyebrow he raised as I approached. I remember it and I treasure it.

It wasn’t a very long wait as book-signings go, but it didn’t matter. I would have waited an eternity.

When I heard of his death this morning, I found I couldn’t move. It wasn’t a surprise, but it was devastating all the same.

I thought all day about when to write this post. I thought it might be better if I left it until I’m less angry. Less lost. And then I re-read Neil Gaiman’s article on the angry man that was Terry Pratchett.

‘I rage at the imminent loss of my friend. And I think, “What would Terry do with this anger?” Then I pick up my pen, and I start to write.’
— Neil Gaiman

I also read Scott Lynch’s furious There is no Past Tense of Terry Pratchett. So, anger and sadness be damned – here I am.

I’m not angry that Terry has left the world so soon. If there was anyone that could fight Death, it was him. I doubt he left quietly.

I’m not angry that the Discworld has stopped at Raising Steam. What a gift it was. The finest of books in the finest of series. How can I be angry in the face of such of riches.

I could never be angry for the words he left behind. There are so damned many. And they can never be erased. If they burnt every book and tried to erase him from the libraries, the orangutangs and I would still hold his memory. Perhaps not every word – not exactly as it spilled across the page – but the way of his words, his way of seeing things, and the way he could shine a light upon an otherwise upside-down world.

His works don’t stop here. They can’t stop. His words and his worlds live on. His fans, to who he was so giving and so generous, will carry them always.

We will be forever grateful.

So, why am I angry? I’m angry for the way that we lost him. That we had to lose him at all. What I want to say here, falls apart. I stare at this paragraph and the screen blurs. It is futile and it is anger. It is loss.

Since my teenage years, Terry has been a constant thread in my life, from the first word to the last. When the internet came along, he was there with it. When The L-Space web and afp were built, if you lurked and were patient, you would find traces of his presence.

His constancy has been his words. His words and his vivid, insightful, incredible imagination.

I was asked recently about authors that have influenced me. Without notice, it’s an unfair question and, while I came up with some good authors at the time, Isaac Asimov included, I left out so many. Including Sir Terry. Because he wasn’t an influence. He was bigger and wilder than that. His words were everywhere. He was a flood. A constant, bright and shining wonder.

I have more than once taken the time to try and tell him what he meant to me. By email, in person, in dedications. And, if only the once and only briefly, I think that he heard. I still have his reply. What I told him wasn’t enough. It couldn’t be. How could I ever find words big enough to pay back the incredible debt of gratitude I owe him?

I was a stranger to him, but he resided deep in my heart and mind. And, although he is gone, it is there I will forever find him. There and in the pages of his books.

In your words you live on.

‘Up on the mountains, as the blizzards closed in, there was a red glow in the snow. It was there all winter, and when the spring gales blew, the rubies glittered in the sunshine.

No one remembers the singer. The song remains.’

House of film – The Black Rose

I love words, big and small. I'm a plain English writer and editor by day, and a fiction writer by night.